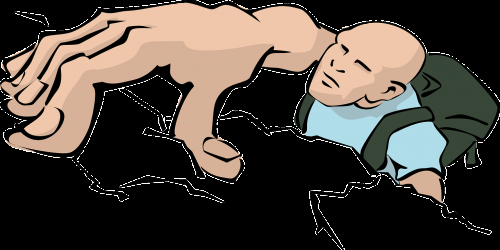 Perhaps you’ve heard the story of the mountain climber who was determined to reach the summit of a high mountain. After much preparation, he began his adventure. Desiring the glory for such an achievement, he went alone, not telling anyone of his plans. He began his final ascent as daylight faded in the western sky. As nightfall approached, he fought the feeling of being overcome by the encroaching darkness.

Only a few yards from the summit, he slipped, falling off a rocky ledge at a frightful speed. During those anguished moments, his life passed before him. Thinking death was imminent, he felt his safety rope begin to tighten around his waist.

Let go of the rope

Suddenly he found himself suspended in midair. In those first desperate moments a spontaneous prayer sprang from his lips, “God, please help me!” Then unexpectedly a deep voice from heaven responded, “What would you have me do?” The mountain climber replied that he wanted to be saved. God answered with another question, “Do you really think I can save you?”

“Of course, my Lord!” the man replied. Then God told him if he wanted to free himself all he had to do was to cut the rope. After long moments of silence, the man responded by tightening the rope around his waist.

The following morning a local mountain rescue team arrived only to find the man dead. He had frozen to death, his hands wrapped firmly around a rope tied to his waist, hanging two feet above the ground.

How tight is your rope

How tight is our rope? How many of us would obey the voice of God and let go of our rope? God instructs us not to be afraid, but to trust His Word. “For I the Lord your God will hold your right hand, saying to you, ‘Fear not, I will help you’”(Isaiah 41:13).

How many times have we asked God to rescue us or bless us physically, financially or spiritually while refusing to obey the instructions of God’s Word? Sometimes it’s hard to see how God is answering our desperate pleas for rescue. Faith is believing what God says, and acting on that belief.

Thy will be done

Many years ago, an 18-year-old boy was critically injured in an automobile accident. His mother prayed to God for his healing by praying for God’s will to be done. Sadly, her son died from his injuries. God’s will in this matter was painful and difficult to accept, but as time passed she learned to appreciate the power behind her prayer. Jesus Christ understood what it means to pray for God’s will to be done.

Just hours before His arrest Jesus knew He was to go through the most difficult time of His life. “He went a little farther and fell on His face, and prayed, saying, ‘Oh My Father, if it is possible, let this cup pass from Me; nevertheless, not as I will, but as You will’” (Matthew 26:39). A few minutes later, when He prayed again, His prayer was a little different. “Again, a second time, He went away and prayed, saying, ‘O My Father, if this cup cannot pass away from Me unless I drink it, Your will be done’” (verse 42).

How many times have we asked God to rescue us or bless us physically, financially or spiritually while refusing to obey the instructions of God’s Word?

What is the difference between these two verses? In verse 39 He said, “If it is possible, let this cup pass from Me.” Then in verse 42 we read, “If this cup cannot pass away from Me unless I drink it, Your will be done.” In verse 39 we see the human side of Christ wanting to know if there was any possibility His suffering could be bypassed. Of course, He knew this was not the case, but as a human being He was greatly troubled as He contemplated what He was about to go through. Then in verse 42 we see the fact that He had accepted His fate, and indeed, was willing to face His terrible destiny on the cross.

He did not seek to change God’s will, but was seeking confirmation of it in the midst of His fiery trial. Jesus now sits at the right hand of God as Savior of the world, King of Kings and Lord of Lords. He yielded to His Father’s will, thus setting us an example. Seeking God’s will is the ultimate goal of every Christian.